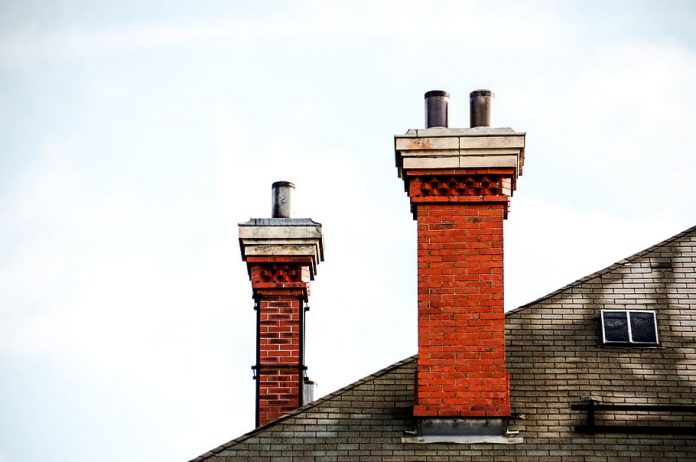 Chimneys are built to survive extreme weather, from record-breaking summer temperatures to intense storms and wind-driven rain. Constant exposure to the environment, on the other hand, tends to take its toll over time. The mortar between the bricks will eventually wear away, allowing water to escape through the roof. Repointing helps fix the damage, but how much does chimney repointing cost on average?

Repointing a chimney, often known as ‘tuckpointing,’ is renewing the exterior section of the mortar joints in a chimney. Weather deterioration can cause gaps in the joints between masonry pieces over time, enabling water to leak in. If left untreated, this might eventually result in roof structural damage and possible leaks in your home. If the chimney’s structure deteriorates sufficiently, you may have to pay for leaning chimney stack repair. Even though chimney repointing is a relatively simple procedure for a professional, it is not suggested as a DIY project for homeowners due to the work’s frequently dangerous nature.

How much does it cost to repoint a chimney?

The cost of repointing a chimney varies based on a variety of factors. To begin with, the cost of employing specialists to repoint a chimney in a semi-detached property is often approximately £600. Because roofers usually work in pairs for safety reasons, this is divided into the average daily rate of a roofer (£150 a day) multiplied by two. The cost of materials and erecting scaffolding (about £150 per day) will be added to the overall chimney stack repair cost estimate.

How much would a chimney stack repair in the UK cost?

Costs of repointing chimney stacks depend on a variety of factors

How much does a chimney stack repair cost? The quick answer is that it is debatable. The total cost of repairing chimney stack damage is likely to be influenced by the following factors:

Is it better to repoint or rebuild?

A neglected fracture in the brick and mortar of the chimney might eventually lead to significant structural damage, necessitating either repointing or a complete rebuild. To figure out whether you need to repoint or replace a section of your chimney, first see if it still has any structural integrity. You should probably hire a professional chimney sweep to evaluate the condition of your chimney for this.

The current mortar on your chimney is filled in and sealed during repointing. It’s frequently thought of as a preventative procedure to preserve your chimney from degrading further and risking structural harm. It may only be essential to repoint your chimney if the bulk of its structural integrity remains. Depending on the size and depth of the damage, repointing a chimney might cost anywhere from $700 to $1,200.

Read More: Some Contemporary Fireplace Designs For Your Home

Repointing may not be enough to repair a degraded chimney, and it will need to be rebuilt. On the other hand, chimney reconstructions can take a variety of shapes. Often, just the part of the chimney exposed to the weather has to be rebuilt. In this situation, your chimney will be rebuilt from above the roofline by a professional chimney repair provider. The damaged section of the chimney is carefully removed and rebuilt here. The present flashing, the metal that connects the chimney to the roof and prevents leaks, will also need to be replaced.

However, you may decide that the hassle of maintaining a chimney isn’t worth it. Chimneys can be partially or entirely removed. The chimney stack is removed from above the roofline, and the roof is closed during partial chimney removal. Your fireplace will remain in your home after a partial removal, but it will no longer be functional. It costs between $400 and $1,000 to remove the outer part of your chimney.

Removing a part of your chimney from within your home might provide more room. The chimney stack on the roof and the chimney breast within the home are removed as part of the complete chimney removal. The cost is higher because this technique entails fixing the roof, the flooring and walls: $2,000 to $4,000.

While chimney repairs can be costly, following essential chimney maintenance practices, many of the most frequent significant repairs can be mitigated or avoided entirely. A professional chimney sweep should inspect the interior and exterior of your chimney once a year. Softwoods, such as pine or fir, should not be burned since they can quickly cover your flue with soot. Greenwood, or freshly cut logs, should also be avoided since they create a lot of smoke and creosote, which will pile up in the chimney.

You can discover minor fractures and deteriorations before they become more prominent, more expensive problems by getting your chimney examined regularly. Maintaining your chimney will allow you to gather around the hearth with those you care about without stress.

Repointing vs. tuckpointing: What’s the difference?

Despite being sometimes used interchangeably, there is a slight distinction between repointing and tuckpointing. Replace broken mortar joints on a chimney is known as repointing.

How often should you repoint your house?

After your chimney has been appropriately repointed, it should last at least 30 years before it has to be repointed again.

Is it possible for me to repoint a chimney myself?

You may save money by doing it yourself instead of paying a professional. However, we wouldn’t advocate it unless you’re comfortable with the procedure.

Apart from this if you are interested to know more about kitchen cabinets then visit our Home improvement category.

Designer Wall Mirror – A popular feature to enhance the appearance...

Which Is Better for a Home in 2023: Building or Remodeling?

The Stunning Charm of Fireplace Surrounds